An April 2009 survey by the Pew Research Center’s Internet & American Life Project shows 63% of adult Americans now have broadband internet connections at home, a 15% increases from a year earlier. April’s level of high-speed adoption represents a significant jump from figures gathered by the Project since the end of 2007 (54%).

The growth in home broadband adoption occurred even though survey respondents reported paying more for broadband compared to May 2008. Last year, the average monthly bill for broadband internet service at home was $34.50, a figure that stands at $39.00 in April 2009.

Some 39% of Americans have positive and improving attitudes about their mobile communication devices, which in turn draws them further into engagement with digital resources – on both wireless and wireline platforms.

Mobile connectivity is now a powerful differentiator among technology users. Those who plug into the information and communications world while on-the-go are notably more active in many facets of digital life than those who use wires to jack into the internet and the 14% of Americans who are off the grid entirely. 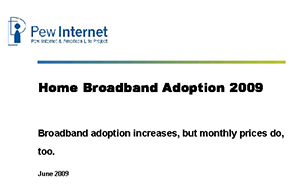