Closing the Digital Divide is an important goal for the California Public Utilities Commission. State-financed programs, such as the California Advanced Services Fund and the California Emerging Technology Fund, exist to increase access to broadband and promote adoption and use of broadband.

The basis for this report is the Federal Communication Commission (FCC)’s Form 4771, a semi-annual report filed by Internet service providers that shows how many wireline and fixed wireless connections they claim per census tract. This report does not include mobile subscriptions because they are not always reported at the census tract level, but rather at the statewide level. The data contained in the FCC’s Form 477 are imperfect; therefore we make an effort in this paper to highlight areas we think are incorrect or misleading. Here are our findings: 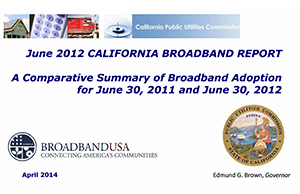