The EO charged the Task Force with developing two reports. This first report is limited in scope to recommendations for “administrative actions that can result in immediate promotion of broadband access and usage.” In considering this mandate, the Task Force included administrative actions that could be taken solely by the Office of the Governor, an agency, or department. The final report, to be submitted in October 2007, will recommend a comprehensive set of actions that California can take to eliminate barriers to broadband access and adoption. 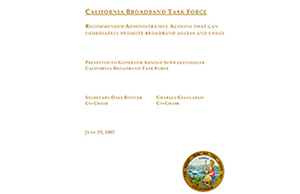