The presence and use of computers has grown considerably over the past few decades. In 1984, 8 percent of households reported owning a computer according to the Current Population Survey (CPS). Over half of adults who said they used a computer at home in 1984, 59 percent reported they were learning how to use it.1 Adults used computers for a limited number of activities such as word processing, video games, and jobs. By 2015, however, the percentage of households with a computer had increased almost tenfold to 79 percent in the CPS. In 2016, the American Community Survey (ACS) found that 89 percent of households had a computer, making it a common feature of everyday life. Nowadays, people use computers for an even wider range of uses including online banking, entertainment, socializing, and accessing health care. 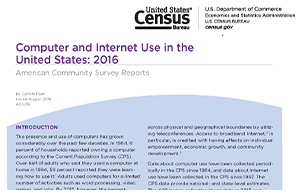