Broadband has been increasingly recognized as a service of general economic interest in recent years.1 Broadband’s economic significance can be put into context by referring to similar changes in other areas of infrastructure, such as road, rail, and electricity.  Each of these infrastructure services transforms economic activities for citizens, firms, and governments; enables new activities; and provides nations with the ability to gain competitive and comparative advantages. Though many of these advantages were unforeseen when original investments were made, they quickly became an essential part of economic lifestyles and activities. A similar assumption about the expected transformative benefits of broadband on economic and social variables has led many  governments to set ambitious targets for its deployment.

In making a case for public policy on broadband, many studies have sought to identify and measure broadband’s economic benefits. Though some of these studies have found a positive relationship between broadband access and economic development, most of them have been restricted to developed economies and their firms and communities, and to qualitative arguments and case studies. This chapter attempts to fill the gap on the macroeconomic evidence of broadband’s impact, in both developed and developing countries. 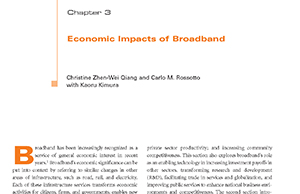