Exploring the Digital Nation: Embracing the Mobile Internet builds on the last Digital Nation study (NTIA & ESA, 2013) and examines data from the 2012 Current Population Survey (CPS) describing Americans’ use of computers and the Internet. Data from this survey depict the accelerating popularity of mobile phone-based Internet use across American demographic groups. The Census Bureau collected data from over 53,000 households in the October 2012 CPS Computer and Internet Use Supplement, forming a representative sample of the 122 million households across the United States. NTIA’s analysis of this dataset, summarized below, reveals a mobile Internet explosion, accompanied by narrowing but persistent disparities in computer ownership and Internet use overall.

As in all installments of Digital Nation, this report includes NTIA’s analysis of the demographic characteristics of home Internet users and the technologies they use to go online, as well as the alternative locations where they use the Internet. The report also presents data on the primary reasons why some Americans do not access the Internet from their homes. These data can inform further research and policy that strives to eliminate disparities by increasing the availability of affordable broadband in the United States and promoting broadband adoption by all Americans. 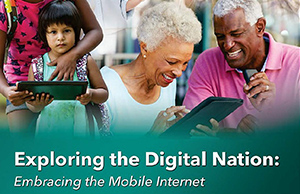