Broadband is increasingly intertwined with the daily functions of modern life. It is transforming agriculture, supporting economic development initiatives, and is a critical piece of efforts to improve health care and modernize transportation. But the Federal Communications Commission (FCC) estimates that 21 million¹ Americans still lack broadband access. Other sources place this number as high as 162 million.²

Communities without reliable high-speed internet service cite a growing gap between the resources and opportunities available to their residents and those in communities that have a robust network.³ Recognizing the importance of broadband and responding to such frustrations, states are seeking to close this gap. Most have established programs to expand broadband to communities that lack it or are underserved.

The Pew Charitable Trusts examined state broadband programs nationwide and found that they have many similarities but also differences that reflect the political environment, the state’s resource levels, the geography of the areas that remain unserved by broadband, and the entities that provide service.

While it is clear that there is no one-size-fits-all approach for state expansion efforts, some measures that many states have taken are proving effective. This report identifies and explores these promising practices through examples in nine states: California, Colorado, Maine, Minnesota, North Carolina, Tennessee, Virginia, West Virginia, and Wisconsin. Pew identified the practices through conversations with more than 300 broadband stakeholders, including representatives of state broadband programs, internet service providers (ISPs), local governments, and broadband coalitions. 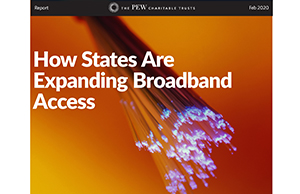