With lacklustre growth across much of the globe, monitoring and understanding the role of ICTs and the Internet in the broader economy is a priority. Measuring the Digital Economy maps existing indicators against digital economy policy issues, identifies gaps in the measurement framework, assesses progress, and proposes a forward-looking international measurement agenda.

ICTs have triggered deep changes in economies and societies
The number of Internet users in OECD countries increased from fewer than 60% of adults in 2005 to about 80% in 2013, reaching 95% among young people, with large differences across and within countries. In 2013, more than 90% of individuals accessed the Internet in Luxembourg, the Netherlands, the Nordic countries, and Switzerland against 60% or lessin Greece, Italy, Mexico and Turkey. The gap between Internet uptake among the elderly and the younger population generally remained high in the lagging countries compared to the leaders.

Fifteen-year-olds in the OECD spend about 3 hours on the Internet on a typical weekday and more than 70% use the Internet at school. In OECD countries, 62% of Internet users participate in social networks and 35% use e-government services. About half of individuals in OECD countries purchase goods and services online, and almost 20% in Denmark, Korea,Sweden and the United Kingdom use a mobile device to do so.

In 2012-13, 77% of enterprises in the OECD area had a website or home page and 21% soldtheir products electronically. Over 80% of enterprises used e-government services. 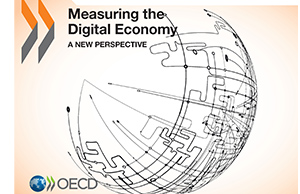