The California Emerging Technology Fund (CETF) sponsored and advocated for the passage of the Internet For All Now Act of 2017 (AB 1665). The legislation established the goal of achieving 98% broadband deployment in each region of California and assigned the responsibility of the goal to the California Public Utilities Commission (CPUC) given their role in administering the California Advanced Services Fund (CASF). AB 1665 also directed CPUC to optimize opportunities to leverage federal funding and other resources to prudently use the CASF. CETF strongly recommended to the CPUC during the AB 1665 rulemaking process to work with the Regional Consortia in order to engage all stakeholders in each region, including Internet Service Providers (ISPs) and local governments to develop a “Preferred Scenario” to achieve the 98% goal. CETF stressed the importance of harnessing the power of “economies of scale” in infrastructure construction in order to accurately determine the percentage of CASF subsidy necessary to achieve the 98% goal and to avoid cherry-picking by ISPs of the most lucrative unserved communities for CASF applications without helping the region find the most cost-effective strategies in attaining the goal.

Fresno State’s Office of Community and Economic Development (OCED), which operates the San Joaquin Valley Regional Broadband Consortium (SJVRBC) as an initiative of the California Partnership for the San Joaquin Valley, was awarded a grant by CETF to produce the eight-county region’s Preferred Scenario report. The objective of this report is to delineate the challenges the SJVRBC designated area faces in expanding broadband services to the region, the assets its stakeholders have to proliferate broadband access, and what is needed to attain 98% broadband deployment. 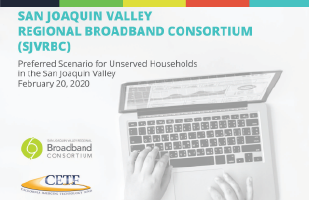