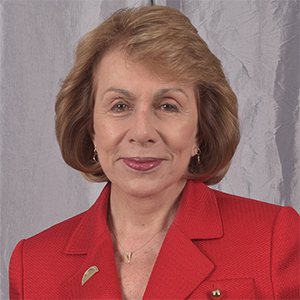 Sunne Wright McPeak is the President and CEO of the California Emerging Technology Fund (CETF), a statewide non-profit foundation whose mission is to close the Digital Divide by accelerating the deployment and adoption of broadband.  With McPeak’s vision and drive, CETF has positioned California as a national leader in advancing Digital Inclusion, developing and launching groundbreaking initiatives such as the Digital Literacy Executive Order, School2Home, California Telehealth Network, and public information campaigns Get Connected!, Internet For All Now, and Digital Equity Bill of Rights.  CETF has sponsored several successful bi-partisan legislative bills, including the Internet For All Now Act of 2017 (securing authorization for $545 million into the California Advanced Services Fund) and has negotiated Memoranda of Understanding for public benefits in conjunction with corporate consolidations with Frontier Communications, Charter Communications, and T-Mobile.

As Secretary of the California Business, Transportation and Housing Agency (2003-2006), McPeak oversaw the largest State Agency. She was responsible for more than 42,000 employees and a budget in excess of $11 billion.  Under McPeak’s leadership, performance and productivity in all 14 Departments of the Agency improved significantly—cutting average wait times at the DMV from over an hour to 21 minutes, reducing by two-thirds the time to issue real estate licenses, and generating more than $180 million in savings.  She provided key policy leadership in support of the Governor to develop and implement major investments in transportation and infrastructure while fostering groundbreaking regional “sustainable smart growth” planning advancing the “3Es” for triple bottom-line returns:  Prosperous Economy; Quality Environment; Social Equity.

Before being recruited to the Governor’s Cabinet, McPeak served for 7 years as President and CEO of the Bay Area Council, a prominent employer-led policy organization addressing regional economic prosperity issues.  For 3 years prior, she served as the President and CEO of the Bay Area Economic Forum, a public-private partnership between the Bay Area Council and the Association of Bay Area Governments.  She pioneered regional economic performance metrics to drive public policy, adoption by local governments of a regional 3Es compact on sustainable smart growth, and capitalization of equity funds to invest in low-income neighborhoods.

McPeak served for more than 15 years on the Contra Costa County Board of Supervisors, having been first elected at age 30, and was elected President of the California State Association of Counties in 1983.  When she left office, her colleagues named the Board Chambers in her honor.  Prior to being elected to public office, McPeak owned a consulting business in health and human services.  She served on the Boards of Directors for 2 publicly-traded corporations for 20 years.  She was inducted into the National Academy of Public Administration in 2016 and received the Champion of Technology Award from the California State Fair in 2018.  McPeak represents CETF on the California Broadband Council.

Sunne (whose first name is her Norwegian grandmother’s family name) grew up on a small dairy farm in the San Joaquin Valley.  She earned a B.A. in an Individual Major (International Medicine) from the University of California, Santa Barbara, and a Masters of Public Heath in Health Education and Medical Care Administration from the University of California, Berkeley.  She has been awarded two honorary doctorates from California State University East Bay and John F. Kennedy University.  She and John McPeak have been married for more than 50 years and their family includes 2 sons, a daughter-in-law, and 4 grandchildren (and Breezy, the 5th Norwegian Elkhound).