A Summary of Broadband Availability and Adoption in California as of June 30, 2011 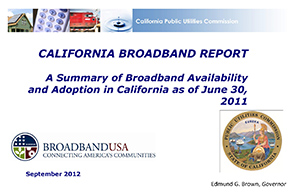