A decade ago, the increasing importance of technology led policymakers, industry, and advocates to make reducing the digital divide a high priority policy issue in the public and private sectors.  Since then, the role of the Internet—at work, at school, at home, and in the community—has continued to grow. Yet policy interest in children’s access to the Internet appears to have cooled, due at least in part to a sense that most of the divide has been closed.

Based on the data collected over the past decade, there is no doubt that more American children of all incomes and backgrounds are using computers and the Internet than ever before. But it is also clear that some groups of young people—primarily low income and minority youth—have poorer access to technology than others. This issue brief explores the dimensions of the current digital divide for children and youth, and the
past and potential role of federal policy in connecting more young people to the digital world.

Since it was coined in the mid-1990s, the term “digital divide” has mostly been used to describe the gap between those who have “ever” and those who have “never” used a computer or the Internet. But as technology and its role in our society evolve, the concept of what constitutes access is evolving, too. 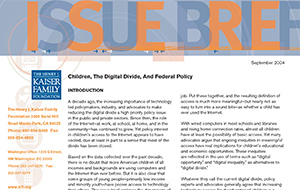