A Broadband Vision for California

This report has been commissioned by the Corporation for Education Network Initiatives in California (CENIC). CENIC is a not-for-profit corporation that serves the networking needs of all of California’s educational entities, from K-12 to the research universities. CENIC’s Next Generation Internet (NGI) Roundtable is catalyzing a statewide intellectual hotbed and first-of-a-kind technology test bed for solutions to speed the deployment of ubiquitous one gigabit (one billion bits per second) in the “first mile.” The goal of one gigabit represents more than a thousand-fold increase from today’s commercial Digital Subscriber Line (DSL) and cable data networks. 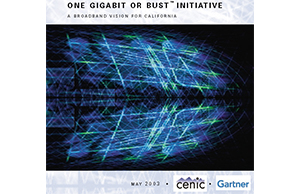