While increased internet adoption and the rise of mobile connectivity have reduced many gaps in technology access over the past decade, for some groups digital disparities still remain

When the Pew Internet Project first began writing about the role of the internet in American life in 2000, there were stark differences between those who were using the internet and those who were not.1 Today, differences in internet access still exist among different demographic groups, especially when it comes to access to high-speed broadband at home. Among the main findings about the state of digital access: 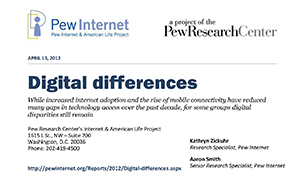