Household use of broadband Internet service has risen dramatically during the first decade of the 21st century as the Internet has become integral to the lives of most Americans. Nonetheless, not everyone uses broadband Internet – either by choice or because they lack access. This report, prepared jointly by the Commerce Department’s Economics and Statistics Administration (ESA) and National Telecommunications and Information Administration (NTIA), explores differences in broadband Internet use among households.

This report and the earlier NTIA report used data from a special 2009 supplement to the Census Bureau’s Current Population Survey (CPS), which asked questions about broadband Internet use of more than 50,000 households. 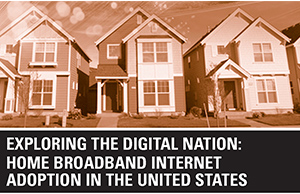